About Umeed and Youth Force:

Umeed: Established in 2005, Umeed, the programme was formulated where young talented youth who due to social and economic constraints are not able to pursue their education ahead and thus are not eligible for employment are trained in various professional courses, which then makes them qualified for a salaried position at an organisation through a vigorous process of placement and counseling.

Youth Force: : Established in 2012, Youth Force is new change programme incorporated at SAATH which aims at providing a platform to the youth of the urban poor settlement. This program currently looks at forming Youth force groups where young talented youth gather discuss upon issues, plan and execute activities, drives and cultural programs forming a doorway to leisure activities as well as empowering them with confidence and problem solving practices.

Nineteen year old Rahul Makwana a resident of Behrampura, Ahmedabad comes from a family of four members. He is pursuing his Bachelors in Business

Administration from G.L.S., Ahmedabad. Nitin’s father works full-time at an import export workshop and is earning Rs.10,000 every month which nowadays is not enough to meet the requirements of a four member family. Rahul came to know about the UMEED course through his neighbor who had already attended the tally course at the Behrampura UMEED center. He approached the center for the details of the courses like its structure and its fees. He had always had a keen interest in accounts and so decided to join the tally course. Rahul explains “Initially I did have my concerns and doubts about what and how would they teach in the course since the cost of the course was a minimalistic Rs. 500. The timings were never a constraint as I joined the course during the vacation period. Even after the college commenced my professors were extremely supportive of me and were ready to be flexible with my timings. The course structure itself was perfect for me. Along with training in tally I got a chance for personal development. I was always interested in event management and with the help of the UMEED trainers I was able to organize a talent show when our course was near its conclusion. The instructors gave me a free platform to speak and allowed free flow of views and ideas”. On the completion of the course Rahul got placed at a call center however after going for a week he quit. He felt the work atmosphere at the call-center was such that it did not leave any room for personal growth. He was then placed at an accounting firm by the UMEED PLACEMENT CELL where he received a pay of Rs.4500 per month.

Rahul decide to visit the UMEED center after a few months to collect his certificate. He had a chance meeting with Sandeep Panchal (Ahmedabad co-coordinator of Youth Force) who happened to be present at the center at the time of Rahuls visit. Rahul was immediately interested in the Youth Force. Rahul still had some doubts about the working of the Youth Force programme.  Sandeep gave him an opportunity to attend the youth group meeting that was to take place the following weekend.  The meeting had a profound effect on Rahul. Rahul enthusiastically enrolled himself in the youth force. Rahul voices his opinion on the programme, saying “It acts as a great platform for the youth from the slums to hone their natural talents and grow as individuals. This is instrumental in an individual’s growth. The Youth Force programme is instrumental in connecting youth and helps the individual in understanding the importance of team building and team work. For the economic and social growth of India the development of youth resource is utmost important. The programme also helps in instilling the qualities of team building and leadership skill development. One unique feature of the programme is that everyone is treated as equals may it be the team leader or a new member of the group”.

Along with his group of friends Rahul has been instrumental in the formation of an online shopping site Kharidijunction.com under the guidance of their professor. He now earns around Rs.15,000 a month.    He explains “It is the attitude of a person which can decide his success.  One should always have an adjusting attitude and should be open to everyone’s views. One should be curious to learn new things. Listening is an important key for growth. It is the mental blocks in our mindset which hinders our growth. It is also necessary to face ones fear rather than running away from them.  The most important step to become successful is to first decide what success is. Different people have different perspectives on what can be defined as success. The word “I” should not exist in one’s dictionary. The word “I” should be replaced by “WE”.

In today’s time Rahul feels that the youth sometimes undervalues his own skills. Rahul draws inspiration from his icon Dhirubhai Ambani. The patriotic feeling in him is clearly reflected by the fire in his eyes. He wants to become a youth role model for all his peers who are still struggling to find their foot in the society.

Today we share Rehanaben’s story with you. She has been working with us for ten years now. She was involved in several programmes like the Balghars, Micro-finance and Samvad Community Video Unit. Read about her inspiring life story below!

Rehanaben was born in 1978 in Behrampura area of Ahmedabad. Her father, the sole bread earner of a family of nine, stopped earning after Rehanaben’s elder sister succumbed to injuries of an accident. The burden of nurturing and bread earning for her family then fell upon her mother and her elder brothers, both of whom had to drop out of their high school education. Rehanaben struggled hard to complete her schooling. She sold toffees to her school mates and earned income to carry out the expenses of her school fees. Her struggle to pursue education continued with her aspirations of graduating and post graduating.

Rehanaben came across SAATH when after the 2002 riots SAATH began its relief work in Behrampura relief camps to encourage residents there to get back to their routine and support their lives by generating income streams. Being good at academics, Rehanaben considered joining the Balghar program (pre-school) run by SAATH in the relief camps where she used to teach children and started earning an income of INR 2000 every month. This apart, Rehanaben also spearheaded the task of establishing a Micro Finance Institute in Behrampura. So dedicated was she towards her work that SAATH decided to carry out the daily operations of its Micro Finance Institute from her house in its initial days. In a span of two years, Rehanaben was able to have more than 600 families in the Behrampura area enroll with the MFI and start saving on a regular basis and beginning with microloans gradually.

While Rehanaben continued rendering her services to the MFI, SAATH came up with the concept of using documentary films produced and acted in by the community members to express their concerns over socio-economic occlusions in the community, known as SAMVAD. Initially when asked to join SAMVAD, Rehanaben was reluctant for two reasons; first, she lacked confidence in terms of producing a film and second, she did not want to give up on the hard work that she had put on in establishing an MFI in Behrampura. However, once she started producing films, she came up with brilliant ideas that brought about considerable changes in the community. 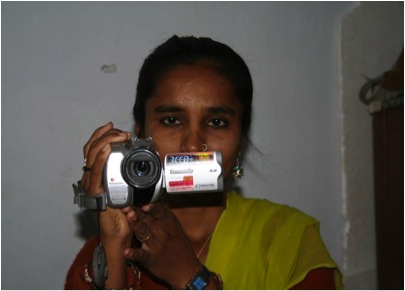 She describes two instances when she herself had to change to convince community through documentaries produced by her. One of them was when the SAMVAD unit was up for shooting against the Addiction of Tobacco in the community. Rehanaben was reluctant in shooting this film since she too had the same habit. It took her three months to get rid of the addiction which had been with her for quite long .Only then did she produce the film and was so convincing in the film that many youth took an inspiration from this and gave up on their addictions as well. Another path-breaking documentary that Rehanaben and her team made was on the Issue of Adulteration in Ration Shops. This was particularly a challenge for her since she belonged to a family of ration shop owners and the film was to be featured on her own uncles. However, she did not deter from bringing out the grievances of the community and shot the film. So compelling and eye opening was the outcome that the shop owners had to concede to fair selling practices after the screening of the film.

After serving in SAMVAD for three years, Rehanaben got back to the MFI operations in 2009 as it was the work that she had always admired and wanted to be associated with. Presently, she is placed as the Branch Manager of Sankalitnagar Branch of The SAATH Savings and Credit Co-operative Society. She describes being associated with SAATH as a major change in her life. “I had no knowledge on computers. It was in SAATH that I learnt many new technologies and also produced films” says an overwhelmed Rehanaben.

Rehanaben has been a paragon for most youth in Behrampura slums. Her undying valor and courage to step out of the confined four walls of the house confidently for serving across communities, has set up an example for many families, who now send their daughters to school and expect them to be self reliant like Rehanaben. Rehanaben is the face of Behrampura and will inspire people there to move ahead with their aspirations no matter what comes their way to make their lifestyles better and uplift the area.

To celebrate the Joy of Giving week, Tulip Telecom Ltd. decided to do something for a good cause. They approached Saath to help them realize their ideas. During one week employees of Tulip Telecom collected items like toys, clothes, packaged dry food and stationery for Saath’s Child Friendly Spaces for child-labourers (CFS). The collection was a succes and resulted in a station car stuffed with useful items! In total 250 children will be supplied with packaged dry food, slates, penboxes and books.

Last Tuesday a group of Tulip Telecom visited the CFS in Behrampura to distribute some of the collected goods to the children. The rest will be distributed among the remaining 7 CFS centres in the Ahmedabad Area.

On behalf of the children of the CFS we’d like to give a big thank you to the people from Tulip Telecom Ahmedabad!

If you would like to organize a similar event or if you have other ideas to support one of our programmes, please contact the RDC unit at rdc@saath.orgor give us a call (079 26929827)
Financial donations are also welcome ofcourse! Visit our pledgepage at GiveIndia. Until the 20th of October, we will receive a matching grant for your donation!