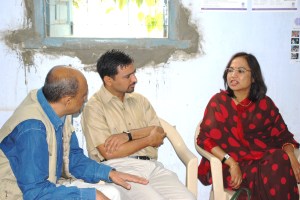 The morning began with an overview of Umeed, which trains and places youth from low-income groups in fast-growing sectors like hospitality, nursing and business process outsourcing. In just two short years, SAATH has trained and placed over 19,000 and provides Umeed graduates with post-placement support through our Livelihood Resource Centre.

After the students conducted the morning prayer and Umeed pledge, Mrs. Chandra met with SAATH service users from slum communities across Ahmedabad to learn more about the ways SAATH’s market-based services link together to address the myriad needs of India’s poor.  Post-visit, the Chandra’s invited our senior staff to lunch in honor of Managining Trustee Rajendra Joshi who was recently named a 2009 Schwab Social Entrepreneur of the Year for India. 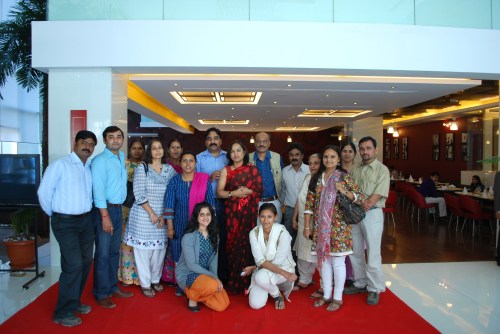 SAATH would like to thank the Chandra’s and American India Foundation for their support of inclusive development in India.

If you are  interested in visiting SAATH programs to learn more about market-based strategies for poverty alleviation in India, please come to our Open House on January 9, 2010 at 11 AM in Vasna.

On November 6, 2009, SAATH Founder and Managing Trustee, Rajendra Joshi, was named the Schwab Social Entrepreneur of the Year [2009]. Along with Brij Kothari of PlanetRead in Mumbai and Padmanabha and Rama Rao of RIVER in Andhra Pradesh, Rajubhai was honored at the India Economic Summit in New Delhi on November 8. 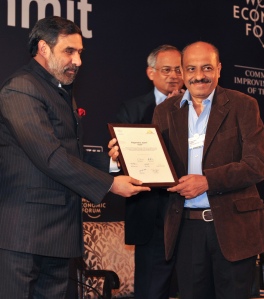 Rajendra Joshi receives the Social Entrepreneur of the Year Award 2009.

The trustees, staff and communities of SAATH want to extend their heartfelt thanks to our supporters who have made this honor possible. We’re here because of you.

From the Press Release:

Today, more than 60 million people live in slums across India, lacking access to healthcare, education, employment and housing. In 1989, Rajendra Joshi developed Saath, which uses public-private partnerships to improve the lives of over 40,000 people per year. In 2009, Saath’s employment programmes with the Ahmedabad Municipal Corporation placed 8,000 slum residents in jobs at firms like Tata Indicom and Kotak Mahindra. Its Slum Networking Program has improved the physical infrastructure of 6,000 households while its four Urban Resource Centers in Ahmedabad have given 22,000 slum households access to microfinance accounts, insurance packages, preventive and natal healthcare, and pre-school education.